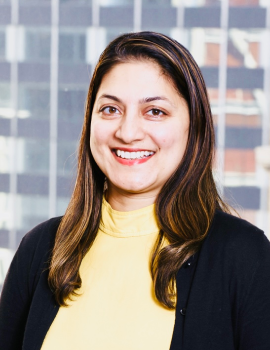 Smitha Patil is a Senior Audit Director and the Global Head of Payments Technology Audit at JPMorgan Chase & Co, leading a worldwide team responsible for executing and delivering technology audit plans. She has over 15 years of experience working in technology auditing for financial services firms, including more than 12 years with JP Morgan.

Prior to assuming her current role in March 2022, Smitha worked for four years as an Executive Director and the Global Corporate Technology Audit team lead, where she was responsible for the Technology audit for areas including Compliance AML, artificial intelligence, machine learning, and third-party oversight. From 2006 to 2010, Smitha worked as a Senior Associate in the IT Risk & Advisory Services division of the accountancy firm KPMG, where she twice received the KPMG Encore Standing Ovation award for outstanding achievement.

Smitha has previously organized activities for both JP Morgan and KPMG’s Network of Women groups. She is also an accomplished linguist, speaking English, French, Creole, Hindi, and Telugu. Smitha holds a Bachelor’s in Electrical and Electronic Engineering from M.S. Ramaiah Institute of Technology and a Master’s in Management Information Systems from Buffalo State College.